We’ve all heard stories of people who went on a day hike or afternoon hunting outing when disaster struck. A short hike or hunt turned into three days lost in the woods, or even worse, the person went missing for weeks and was never heard from again. Backwoods calamities happen every year in America and beyond.

One happened to me a few years ago after a hunting accident, and I almost didn’t survive. The incident taught me that a short walk in the woods can quickly turn into a nightmare if you’re unprepared for the worst. I don’t think everyone should be scared to walk in the woods or needs to bring enough food and gadgets to survive for weeks every time they head out on a jaunt, but there is a happy medium.

A close friend of ours, a helicopter EMS paramedic from Pennsylvania, is well versed in backwoods safety. Helicopters only get called in when things get really bad, so he has obviously seen his fair share of tragic situations that started as harmless outings. According to him, a few simple precautions can greatly increase the odds of getting out of the woods safely, even when disaster strikes.

He believes a person headed for the woods should never leave the trailhead without a simple tourniquet. “Many wounds incurred in the woods are caused by guns and knives,” he said.

A large wound can bleed quickly, and a person can die from blood loss. The truth is that although many people die from these types of wounds, many can prevent death by preparing for them. A simple tourniquet can save a person’s life if they’ve cut themselves or have been involved in a shooting accident.

These types of wounds can be survived in most cases if they happen to an extremity. Everyone should have a commercially produced tourniquet in their backpack with them at all times in the woods. They can be put on quickly and tightened up to halt bleeding.

If a person is in a situation where they need a tourniquet but don’t have one, he advises making one using everyday items.

“A person would need to find a rigid stick, tent stake, or wooden dowel that can withstand lots of torque without breaking,” he told us. They need to find a sock, shirt, or something that can be used to cut off the blood flow around the appendage.

The stick provides the mechanical advantage to tighten the shirt and apply enough pressure to slow down or stop the bleeding. 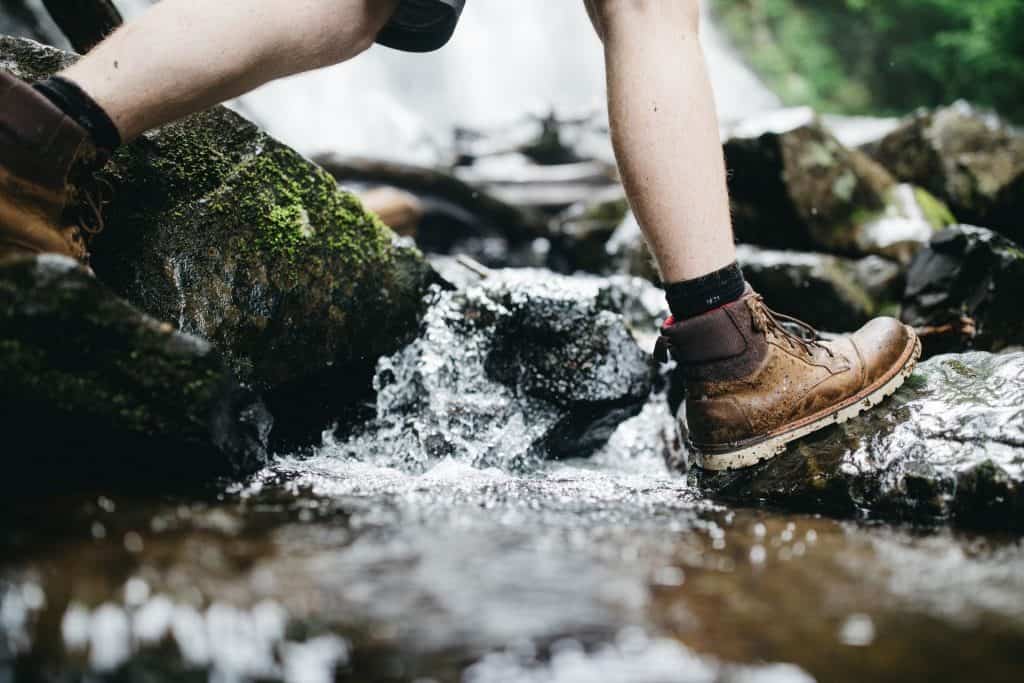 A simple sprained ankle isn’t life-threatening, but suffering one can cause a laundry list of problems. “If a person can’t walk properly and the temperatures are plummeting, or a fresh blanket of snow is covering the ground, things can get ugly quickly,” he warned.

Some argue it’s best to remove your boot when an ankle is sprained, but others advise leaving it on. I say leave it on. If a foot is swollen from a sprain, getting the boot back on can be nearly impossible.

Leave the boot on and quickly cool the foot down. To do this, find a water source like a stream, river, or lake and put your foot, with the boot on, down into the water. Leave it there for an extended time until some of the swelling subsides; then head out of the woods. The cold water will reduce the overall swelling and relieve some of the pain.

When dealing with sprains, he recommends remembering the simple acronym, “ICE,” which stands for “ice it, compress it, and elevate it.” Do these three things quickly.

Make or bring a splint

A broken leg or foot is another calamity that often happens in the woods. He said determining whether something is broken or sprained can be difficult, but in either case, a splint can sometimes help keep the leg straight, so the person can get out of the woods without further problems.

A strong stick and some duct tape is obviously the easiest way to make a splint if a person doesn’t have one, but there are commercial splints made specifically for hunters and hikers. They’re packable and collapsible, similar to a tent pole. If a person spends much time in the woods, these are great to have. A tent pole would also work in a pinch.

Another type of commercial splint he recommends is a SAM splint, which is a bendable piece of foam-covered aluminum. It can be used as an arm, leg, or foot splint—with any part of the body. “A SAM splint is easy to use and can be a real lifesaver when something goes wrong deep in the woods,” he said. 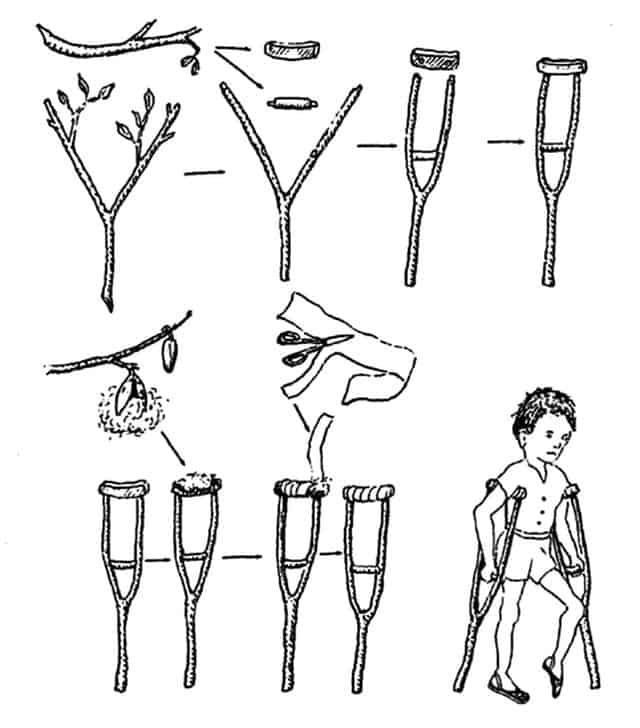 A person who needs a splint will also need some type of crutch. “The easiest homemade crutch is a long, Y-shaped limb that can be used as a crutch under the armpit. When making a crutch, people should keep in mind that it should be lower than you, not higher,” he advised.

Most think about carrying bandages into the woods, but he believes everyone should take it one step further. “I don’t leave home without Quikclot bandages,” he said.

As the name implies, the bandage causes a wound to quickly clot and stop bleeding. The bandage has little beads in it, and when they mix with blood, a reaction causes clotting. A person can push this dressing into a big wound and stop the bleeding.

These bandages work well on head wounds, which bleed badly … Quikclot bandages can stop the bleeding so a person can get out of the woods without extreme blood loss.

One of the most common mistakes he believes people make that results in an expensive helicopter ride is developing hypothermia. “Hypothermia is easily prevented, but once a person has it, it can be life-threatening,” he said.

If a person doesn’t bring enough clothing layers with them, if it rains or snows, or if they sweat a lot and then get cold, the odds of getting hypothermia, especially if they have a long hike ahead of them, is really high.

People shouldn’t leave their vehicle without a fire starter, even if it’s spring or summer,” he added. An extra shirt, pair of pants or thermal blanket can make a world of difference. None of this stuff is heavy or bulky, so there’s no reason not to bring it along. He told us he flown people to the hospital who’ve lost toes due to preventable hypothermia cases. Being prepared for this stuff is a must. 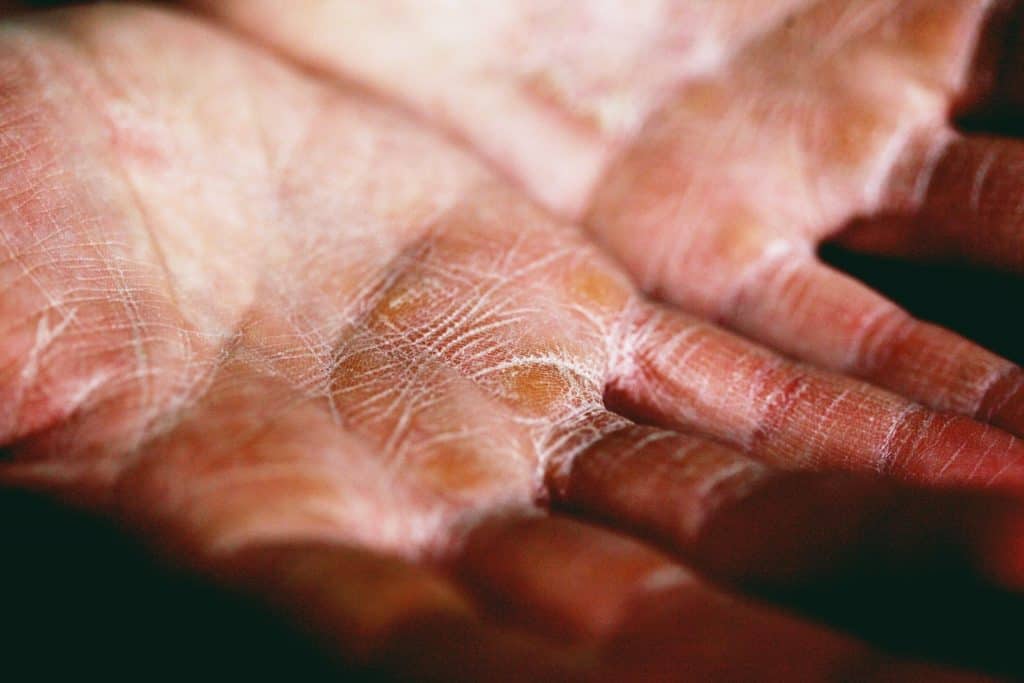 At the other end of the spectrum is dehydration. “We often see cases of dehydration,” he warned. People plan to hike for a few hours and only bring a little water with them. Soon, they’re out of water and have a bad headache.

People can get dehydrated, whether it’s 80 degrees or 20 degrees. Always pack plenty of water, bring water-purification tablets and some type of electrolyte drink or powdered packet in case you get into a real jam.

Don’t leave your vehicle without snacks. A protein bar or two, powdered hydration packets or a small package of peanuts can give you the protein and energy needed to make it out of the woods safely.

He tells people to carry a few honey packets, a few sugar packets and a salt packet. In a jam, quickly consuming these three things in a cup of water will replace electrolytes and other things the body needs to stay focused on getting out of the woods safely.

The adage, failing to plan is planning to fail, is true when it comes to spending time in the woods. Always hope for the best, but prepare for the worst.

Have a first-aid kit with you on every outing, have extra water and clothing, and bring plenty of protein-packed snacks, even if you only plan to be in the woods for a few hours.

We all know a short trip can quickly turn into a harrowing experience. As the saying goes: the best-laid plans of mice and men often go awry. Remember that the next time you lace up your hiking boots.

Gillian Petterson submitted this article for Prepper’s Will.

Source
Backwoods Safety Recommendations From An EMS Paramedic is written by Bob Rodgers for prepperswill.com