Eating Slugs And Snails For Survival

In a survival situation, insects are far more beneficial to harvest than trying to catch meat. But there is one type of bush tucker slithering around in the undergrowth that you may be a bit more adventurous at tackling, and that’s slugs and snails.

In times of need, we have to overcome our prejudices against certain things we could shove in our mouths. I do not believe you can call yourself a true survivalist if you leave out an important aspect of its componentry. Sometimes we just have to close our eyes and chew.

The point I am trying to make is to never overlook something that has a high nutritional content just because it may turn your stomach. I am convinced that if you are not prepared to eat it during ‘peacetime,’ then you are unlikely to overcome that prejudice if the situation really calls for it.

Wrapped up in the fanciful name ‘escargot,’ snails are a common sight on many French menus. They are cooked in garlic butter and served steaming hot in a bowl. You then hike them out of their shell and chew.

Close your eyes, and you could be eating a mussel or whelk. These shellfish and snails all have the same chewy texture, so you shouldn’t find them too stomach-churning. In fact, in a blindfold test, it would be hard to distinguish between the two.

Shelled gastropod mollusks live in the oceans, in freshwater, and on land. Those that have lost their gills and breath air are the easiest to identify, and for the topic of this article, are the most important to us; these are the slugs and snails

Snails and slugs (essentially a snail without a shell) yield very high sources of nutrients, particularly protein and numerous minerals. As with insects, these mollusks are relatively easy to come by if the environment is damp and so are a really accessible food source.

Being nocturnal, the hours of darkness are the best time to hunt them. Let’s have a quick look at slugs and snails in a bit more depth before learning how to cook them.

The green-fingered amongst you will already be acquainted with these shell-less gastropod mollusks. Many slug species are generally regarded as being shell-less, but they do have a reduced internal shell. For example, the earthworm-eating slug in the family Testacellidae is one such species.

The two other slug groups are called roundbacks and keeled slugs. In the case of Roundbacks, the slugs in this group have dome-shaped bodies, and one such example is the common garden slug. The keeled slugs have a ridge, or keel, running along their back. The keeled slugs are the larger slugs, reaching anywhere up to 7-9 inches in length when fully stretched out.

The retractable tentacles on the head are the organs by which the slug smells and can detect food up to several meters away. These black, rubbery-like creatures are covered in sticky mucus and live mainly in leaf litter.

The sight of one making a beeline across the soil towards well-nurtured garden plants will make any vegetable grower worry. With their rasp-like radula (tongue), and chitinised jaw, they can munch their way through succulent plants at an alarming rate. They are far from conservative in their dietary requirements and will also eat carrion and fungi. 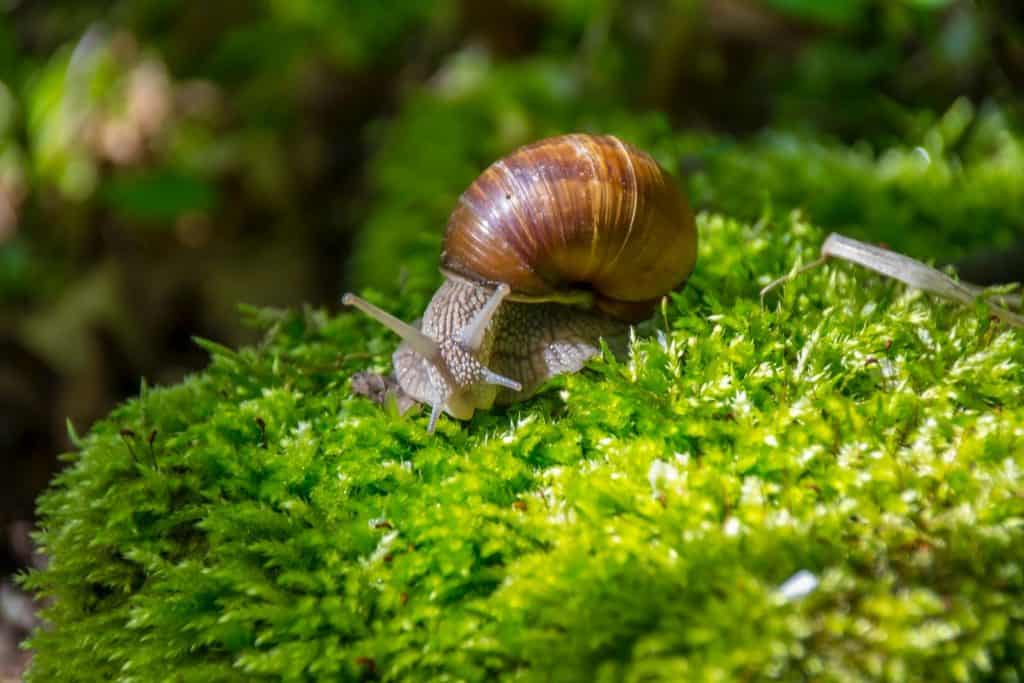 Snails are simply slugs with shells. The shell is made from calcium and forms a spiral column in which the snail lives. Unlike the sausage-shaped slug, the snail’s body is a bag-like structure.

The visible part you see is the foot, with the head at one end. This is identified by the two retractable tentacles. As with the slug, the mucus the snail secretes is used to lubricate the surface over which it is moving. When dry, the mucus forms silver-colored lines, which give its nocturnal activities away in the morning.

As with slugs, the snail is furnished with a rasping radula tongue that makes short work of tender young plants. Although essentially vegetarian, some snails are carnivorous, feeding on earthworms and even other snails.

In the right sort of environment, you won’t be hard-pressed to find slugs and snails. And the good thing is, they are dead easy to catch, so no energy expenditure.

The best places to look are areas of dampness or amongst dew-laden grass early in the morning. Both slugs and snails avoid dry, hot areas and tend to be more active during the evening. It probably goes without saying, but I’ll say it anyway, only collect slugs and snails which are alive.

Avoid anything that looks a bit manky. Having said that, do not assume a snail that is not moving to be dead. Generally, they are nocturnal and sleep during the day. The mucus they secrete seals the shell, preventing the snail from drying out. It forms a hard seal. Puncture this seal, and have a sniff. If it’s not honking, it’s alive.

You can also eat hibernating snails, but you must make sure the seal around the shell entrance is intact and not receding. In case you collect snails with receding seals, you will have to discard them because they are either dead or on the last day of life. 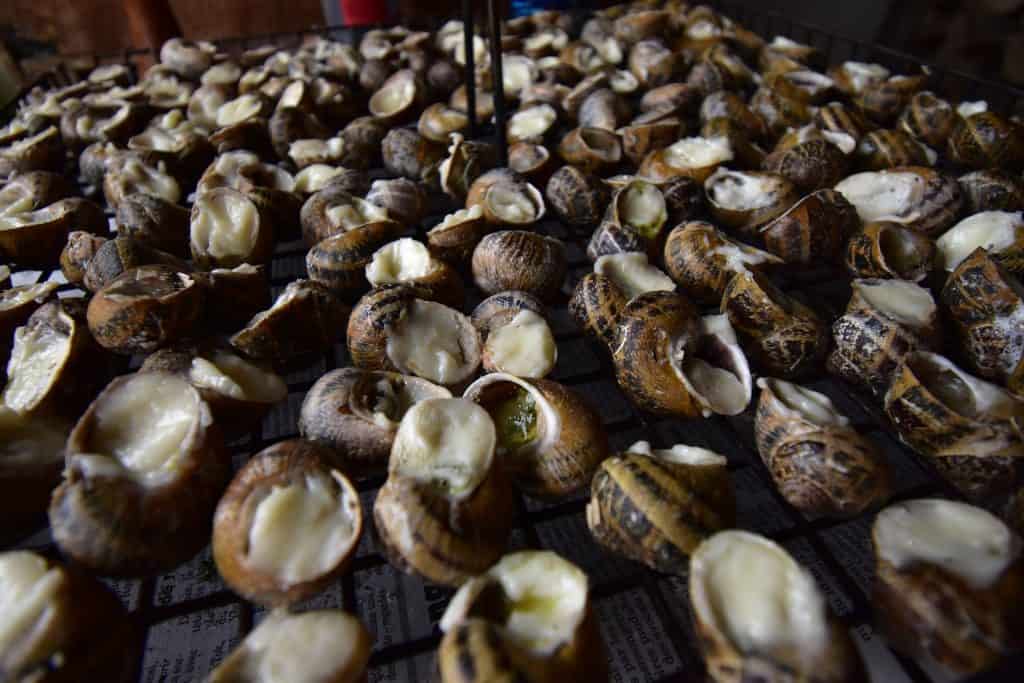 Be extremely cautious if collecting slugs and snails from areas populated by poisonous plants or fungi. Snails, and slugs, in particular, can process the toxins ingested from eating poisonous plants and fungi for their own benefit.

Depending on the plant, cooking these rubbery creatures will not always break down the toxins to make them safe to eat. This is why their stomachs should be purged for at least 24 hours before cooking.

Because slugs are more prone to eating poisonous plants/fungi than snails, people tend to avoid them in favor of their shelled cousins. However, if treated correctly, slugs can be made safe to eat.

As I have just said, snails and slugs should have their stomach purged before eating. Purging basically removes any body waste and, hopefully, the remains of toxic plants from the stomach, rendering the slug/snail safe to eat.

Purging is a very simple process. One way of achieving it is to soak the slug/snails in salty water for about 24 hours. If you happen not to have salt, place them in a container with harmless plants. As they eat these, they will excrete what may have been lying in the stomach.

If you hunt around and find something like wild garlic, or another strong herb, feed them this. The garlic/herb will also infuse into the slug/snails flesh and make them taste a bit tastier. Some people feed them breadcrumbs or bran. This can be a better purging method because it absorbs the toxins present, which are then excreted. Never be tempted to eat slugs or snails raw

How to cook slugs and snails 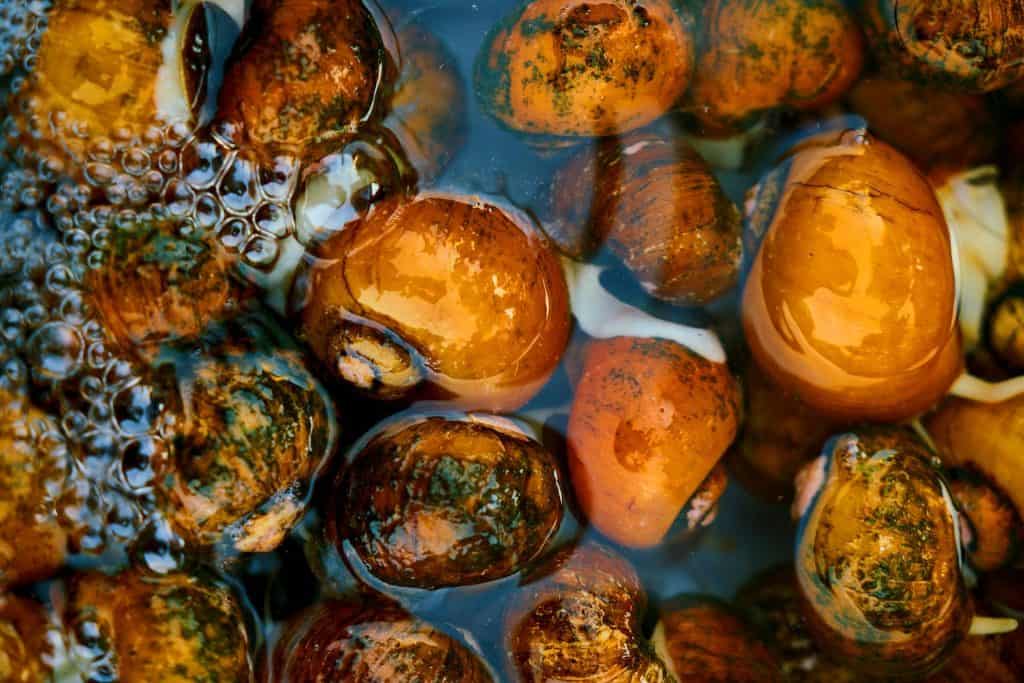 There are several ways in which snails can be cooked. Traditionally they are boiled, but they can also be cooked in the embers of a fire. If you really want to push the boat out, cook them as the French do and fry them in garlic butter.

Cook them for at least eight to ten minutes. If boiling, be careful not to place too many in the pot at the same time. As they get hotter, the water will begin to froth, as though its been whisked. This is caused by the slime released from the body

Taste can be enhanced by adding a spice or strong herb, such as wild garlic or mint to the water. While the foot itself may be slightly rubbery, the rest of the snail is quite soft and tender.

Another way of cooking them is to wrap the snails in a non-toxic leaf with a few herbs and a drop of water. Now cover the leaf with wet mud and cook in the fire’s coals for 10-15 minutes, depending on how many snails you have and how big they are. Since the snails will cook in their own juices, they don’t lose that ‘meaty’ taste you lose with boiling. A similar approach can be had by cooking them in tinfoil.

I suppose if you were really creative in your survival cuisine skills after they have been cooked, you could pierce them with a stick, add a few choice vegetables, sprinkle with a few herbs, and hey presto, you have a rather exotic kebab. Flame-grilled, they may develop a slightly burnt texture, which would make them a tad more appealing/appetizing.

Most probably, the snails you will find in the wilderness will be smaller than the large white snail (Helix pomatia) eaten in France.  Slugs and snails are easy resources to collect and cook and should not be overlooked as nutritional survival food.

Just think how much you would be paying to eat them in a fancy French restaurant. They are also a really good natural food source to ease yourself into eating more ‘exotic’ bugs.

Resources recommended for preppers and survivalists:

The only survival foods you need to outlast any crisis

How to build a cost-effective and out-of-sight shelter

The solution to becoming your own home doctor when SHTF

The easiest DIY project to produce electricity during a power outage

Source
Eating Slugs And Snails For Survival is written by Bob Rodgers for prepperswill.com

US State By State Spider Guide And Spider Identification Chart